The ins and outs of configuring your feature flags.

Feature Flags can be used to show different variants of a feature to each visitor. Which variant a visitor sees can depend on their unique attributes. This article describes the ins and outs of how you can configure your feature flags to show each user the variant of a feature they are supposed to see.

HappyKit is a feature flagging service specifally written for Next.js. What sets it apart from the competition is that it integrates extremely nicely with Next.js. No matter if you're using SSR, CSR, SSG or a mix of it, HappyKit has got your back.

This article doesn't show these features off, but you might want to explore them on flags.happykit.dev or in the @happykit/flags docs.

These three types are available:

For example, a feature flag of type Boolean has two variants: One with a false value and another with a value of true. So when the feature flag gets evaluated, it can either resolve to true or false.

You can also add an optional name and description to each value. These are only ever used to make the HappyKit's UI more meaningful. They are not used when the feature flag gets evaluated.

And lastly, a feature flag of type Number can resolve to any number.

Environments can be switched at the top of the page. 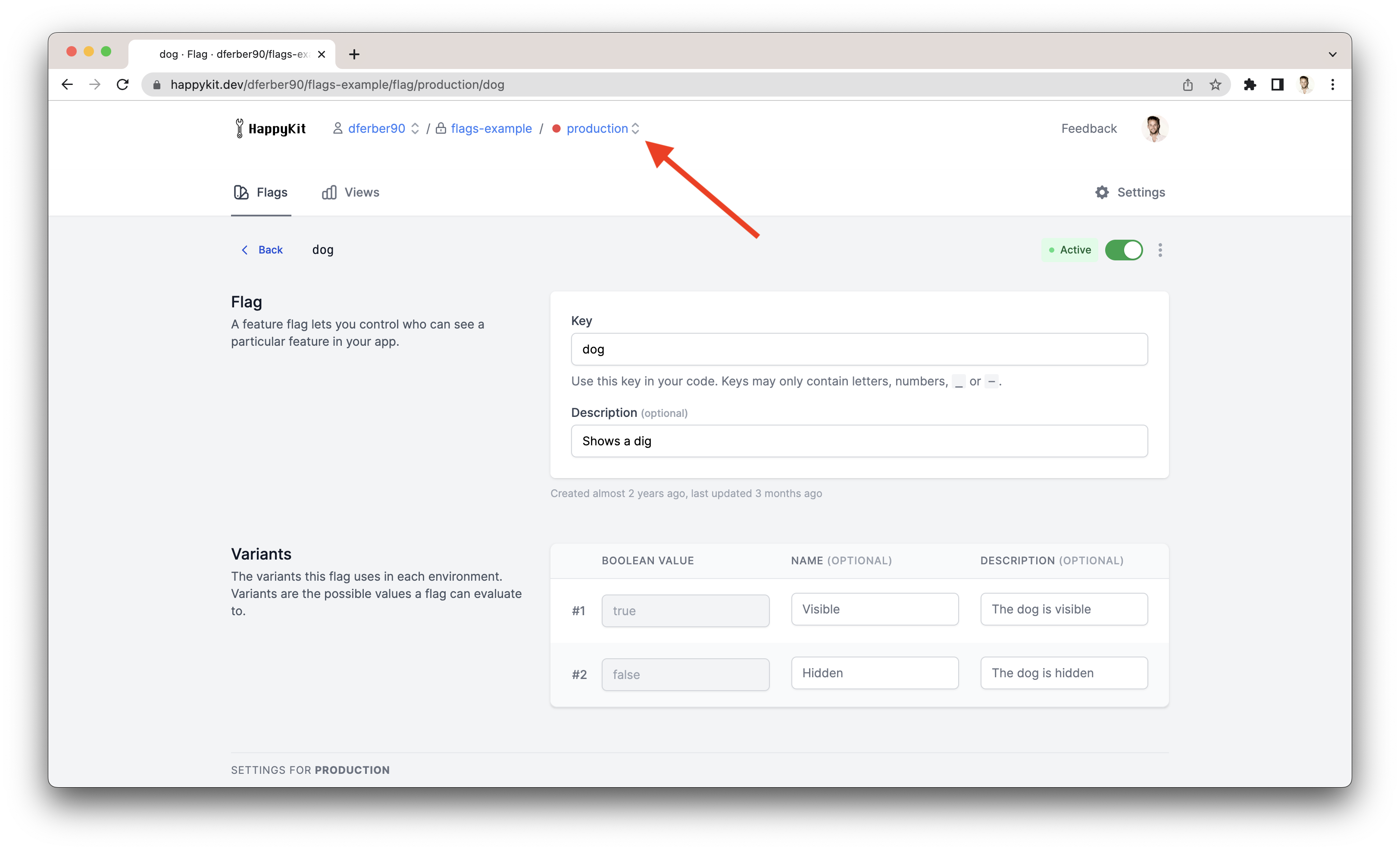 When you integrate HappyKit into your application using @happykit/flags, you can set the envKey by calling configure() as shown in the setup instructions.

@happykit/flags will then evaluate all feature flags for the environment you chose based on the Environment Key you passed in. 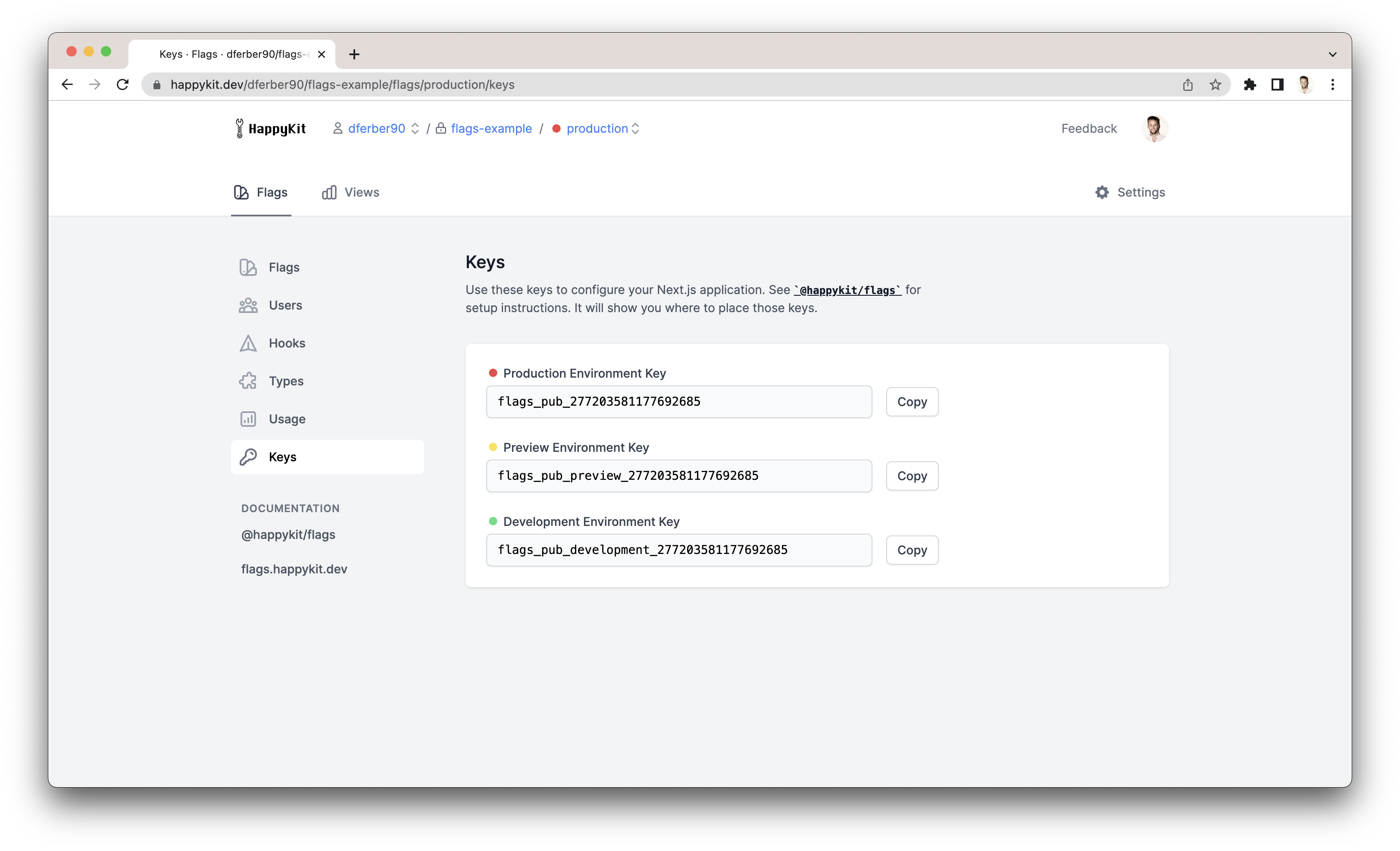 A feature flag can either be active or paused, for each environment.

So a feature flag might be paused in production but active in development. 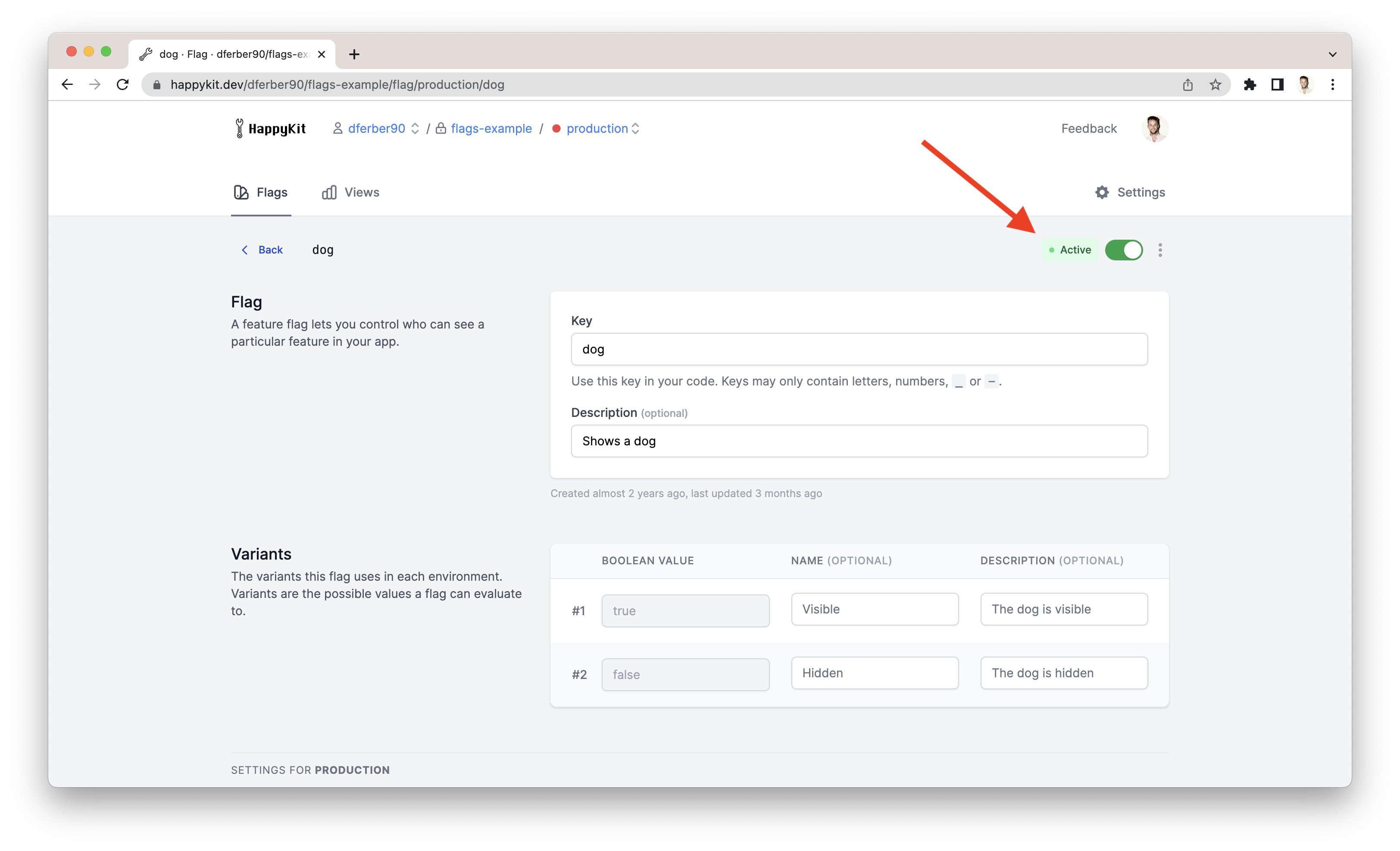 When a feature flag is paused it will skip all configuration and always show the paused default.

When a feature flag is active, it will respect all evaluation rules. It will respect the Target individual users settings you configured (mroe on this later), as well as the Target by rules settings. If none of these match, it will fall back to the active default.

This approach to feature flags regularly surprises people who use feature flags for the first time. The approach is chosen as it's the most versatile. It can handle pretty much any use case. The nicest property of this approach is that you won't ever have to think about your advanced configuration in case you simply want to turn off a feature as quickly as possible. It also allows you to keep your configuration around for when you eventually turn the feature flag back on.

This setting allows you to show a specific variant of a feature to a specific user based on their user key.

Showing a feature only to a select group of people

A common use case for targeting individual users is when you want to show a feature only to specific users, while keeping it off for everyone else.

To do this, first configure the defaults to both hide the feature.

Next, show the feature to the desired users using Target individual users.

Since the feature flag is active, it will now respect your individual user targeting rules. It will fall back to the default if none of these match. The active default is configured to hide the feature.

This setup achieves exactly what we wanted: showing the feature to a select group of users only.

Next up is targeting users by using rules. This is similar to targeting indiviual users, but way more powerful.

You can target anyone visiting your app based on:

I'll not go into more details here as this is likely enough to fill another article. Just know that the system is really powerful and you'll likely be able to achieve whatever you have in mind.

All feature flags always exist across each environment. Each feature flag can be configured differently per environment. The variant a feature flag evaluates to depends on the environment you are evaluating it in and on the provided inputs, for example the user key for individual user targeting.

Not a HappyKit user yet? I'd love if you try out HappyKit. It's free for personal projects. Create your first feature flag at happykit.dev/signup

If you have an questions about how feature flags get evaluated, or about HappyKit in generaly, feel free to tweet at me or send me a DM on Twitter. You can follow my journey building HappyKit on Twitter as well: @dferber90.

If you're looking for a more details introduction, check out Using Feature Flags in Next.js which will walk you through the full setup.